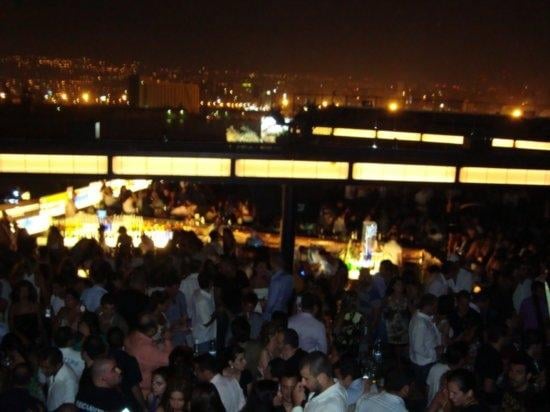 Simply put, Sky Bar is the place to be seen in Beirut. It is one of the most exclusive bars in Lebanon and located on a breathtaking rooftop overlooking the Mediterranean sea, Downtown and all the way up to Jounieh. Sky Bar fits nearly 2,000 people and yet its almost impossible to get a table without an exclusive invite.

Sky Bar is renown for VVIP's, A-list celebrities, infamous politicians, the ridiculously rich and movie stars from Lebanon and throughout the region. This is a place where a bottle of champagne can cost up to $10,000. If you are one of the lucky few to get into Sky Bar you will surely see a different part of Beirut that you never imagine exists.

The Resident DJ at Sky Bar is one of the best in Lebanon and indeed the region. His name is DJ JoJo (AKA Georges Zarifeh). Starting our in 1995 DJ JoJo has played in some of the best places on earth including the Ministry of Sound in London, Billionaire in Sardinia, Kaufleuten in Zurich, Club 400 in Dubai, Aura and Maddox in London, and countless others.

DJ JoJo likes to remix his own and favors electro and progressive House, minimal and tech music Techno and others. He has played with some of the biggest names including DJ Tiesto, Paul Van Dyke, Bob Sinclair and more. DJ Jojo has his own show called Electro Town which airs on mix FM throughout the Middle East.

Sky Bar serves a unique and original menu including dishes im sure no one has heard of like Halloumi Watermelon (fresh watermelon topped with slices of Halloumi cheese), as well as ofcourse all the favourites including sushi, lobster, prime beef, Tahitian chicken and more.