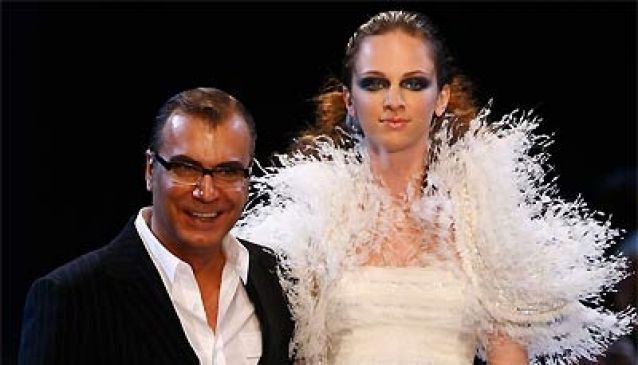 Born and raised in Lebanon, Georges Chakra developed an early passion for fashion design.  After two years of studies in Interior Design, he returned to his initial passion - to draw and create.  Georges Chakra left for Canada where he earned a degree as fashion designer from the Canadian Fashion Academy.

Since 2002, Chakra is presenting, twice per year, his Haute Couture collection during Paris Fashion Week in France.  His collections are always one of the most imaginative.
In February 2009, Chakra introduced his new ready-to-wear line 'Edition by Georges Chakra'.  His first ready-to-wear collection debuted during New York Fashion Week.

Fascinated by Yves Saint Laurent's genius, Georges Chakra is spellbound by the same magical combination of colors and shades. Always respecting the allure of the silhouettes, his designs are dedicated to a modern and self-confident woman. 'I design and create in order to expose a woman's contradictory personality - She seduces with her discreet allure while at the same time through her innate sensuality, shows us her ability to rule through silent presence. The woman should be at the same time angelic and feel absolutely seductive', says the creator.
Chakra is a perfectionist. Each gown is meticulously designed, cut and finished. The designer himself is always watching over the finest details, leading to an always magnificent and luxurious result. 'Everything is in the detail, luxury is in details', is his leitmotiv.